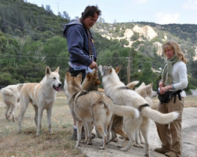 Over the past few years Takoda had been having multiple strokes that had caused him to lose some function in his hind legs. It was increasingly difficult for him to keep up with the younger members of his pack but he continued to show the love, dedication, and strength that only the greatest alphas possess. In March of 2022, Paul and Colette had to make the difficult decision to end Takoda's pain and reunite him with his mate, Alaska. It was a huge blow to the pack to lose their alpha, father, and friend. As time passes and Kiyushka grows the hurt lessens and the pack heals each day.

Just 15 days old, Noshi Takoda became the newest member of the family. Within a week, the pack was off to Colorado, Takoda still on the bottle, even though the funds were still not available. They were about $2,000 shy of the estimated cost. Fortunately, new technology, not available anywhere 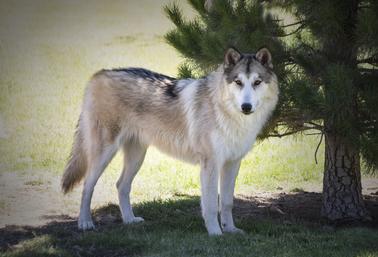 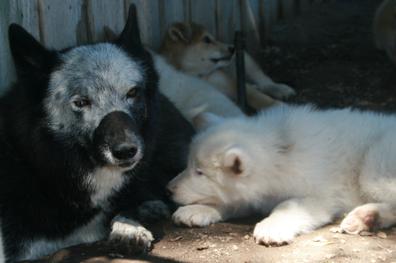 evicted from the city of Los Angeles, thus begun the grassroots effort to procure the land necessary to build the enchanted wilderness experience that they can share with everyone. Shadow had suffered some setbacks due to complications caused by the damage done by the tumor before her treatment. When

Paul Pondella was born and raised in Glendale, CA and has been rescuing wild animals and bringing them to safety all his life. He would find injured birds, squirrels, cats, dogs and bring them home to the veterinarian who lived next door. A dyslexic and troubled child, his education came from his connection to animals and nature. In 1978, at the age of 18, a judge told him to get his act together or his future would not fare well. Paul took this advice to heart and put his love of the outdoors to work. He started mowing lawns and trimming trees and two years later, by 1980, he started Tree King Tree Services, Inc, which is his primary company today. By the age of 32, he had built one of the most prestigious arbor care companies in Los Angeles County and its surrounding areas. His love and passion for animals continued, and he soon became certified in CPR and First-Aid with animals, and well-known for this ability.
Because of his reputation and growing expertise, not only with trees, but also with animals, Paul started getting calls from the ASPCA to rescue wild animals; in particular, wolves. His first rescue was Panda, a black and white wolf/husky hybrid. Six years later, he adopted Kiva, a Grey Timber wolf pup, another rescue from Big Bear, CA.  His relationship with these little orphans was life changing for him, "There is nothing else like them," he claims and so began his education about these magnificent creatures. He quickly became a champion to their plight.
He started dreaming of creating a ranch he would call "Freedom" where children could commune with and learn about nature by running and playing with wolves; all he needed was the land and the wolves.
Sadly, both Panda and Kiva passed away leaving Paul devastated and in pursuit of another wolf. In February of 2005, after having been on a waiting list since 2000, he got a call from a sanctuary with Alaskan Timber wolves, originating in Alaska near Denali National Park and Preserve. He came home with a black pup, just 19 days old. He bottle fed her, taking her with him everywhere he went. "It is wisest to get wild pups before they open their eyes and are able to see or hear. It is less traumatic taking them from their birth pack, and that way they bond to humans as their species, and are much easier to socialize with people." He named her Shadow, but not because of her color. When she started to walk, she would walk directly behind him, in his shadow.
In May, just three months later, he got another call from the sanctuary. Expecting to pick an Arctic/Timber mate for Shadow. Instead he let Shadow choose and she picked Alaska, Allie for short, a beautiful female pup just 20 days old. Paul and Colette initially met in front of a Starbucks in the NoHo Arts District outside her Spiritual Center where she was studying for her Ministerial license. She was drawn to his shiny blue special construction Harley Davidson style motorcycle. Colette knew it was love at first sight; well, with the motorcycle at first, anyway. Discovering he was an arborist, and in need of help with starting a garden at her new apartment, they decided to meet and plan out a beautiful garden together, but more than flowers started to blossom.
Colette and Paul found they had many things in common: they both came from troubled families, they both had dyslexia, a love of the outdoors, and a history of painful and failed relationships. As the garden grew, so did their feelings for each other and it soon became obvious that they had something very special; and for Colette, an animal lover herself, the wolves were just icing on the cake.
When asked what her Ministry will be like... her eyes light up and you can almost hear the howl of this Alpha (mom) Female coming through, "I have always loved children, animals and the outdoors. Although I never had children of my own, I believe life has given me the very rare gift of being a 'den mother' to these beautiful wolves. Being outdoors, teaching children, caring for animals and having a loving family are my passions; now I can take them and make a powerful contribution to others for generations to come."

On March 3, 2012, Shadow’s birth sister gave birth to our next pack member, Freedom (Kiyuska). Then on March 6, 2015, we adopted another relative of Shadow's, a black pup just like her. His name is Wahkan (meaning Sacred). Together, they will carry on Shadow's legacy as the name sake of the property she had chosen, that was left in our care to complete the mission and vision she began. Shadow's courage and wisdom is called on every day to keep us going. She is a beacon of light, love and strength. We will never forget.

On March 25, 2011, the pack moved to the ranch, Freedom. Shadow enjoyed morning walks and cooling off in the 60,000 gallon pond, her favorite spot. However, her conditioned worsened and after a grueling trip back to Colorado with hope of recovery, we

On May 29, 2010,  Allie and Takoda brought six new members into the world and expanded the pack family. As a team, Shadow, Allie, Takoda and the pups along with Paul and Colette started the journey to Freedom,  Paul's lifelong dream. With so many animals they were

​​else in the country called Stereo-tactic Radio-surgery saved Shadow’s life. Even more than that, the procedure cost $1,800 less than quoted. On top of that, as expected, Shadow became Takoda’s surrogate mother and raised him through her recovery. They were inseparable and had a special bond that was incomparable.

we came to see the property we would eventually procure, Shadow, barely able to walk that morning…ran to and fro, playing in the snow, smiling with glee. This surge of life she received from this land was inspiring and all knew they were standing on their future home.

In 2021 Freedom started to have health issues and a local veterinarian was consulted. After multiple tests and procedures Freedom was diagnosed with a tumor on his heart that went undected for an unknown amount of time. A short while after being diagnosed Freedom passed away in Colette's arms. The loss was devastating for both Colette and Paul as well as the other members of the pack. A hole was left in their home and Paul and Colette knew it would have to be filled. After reaching out to multiple accredited organizations they finally found the love they knew would help with mending the wound of Freedom's passing. Her name, Kiyushka, was given in honor of Freedom and she was brought to her new home on January 13th, 2022.

Her introduction into the pack was a long but rewarding process. Everyday she grows more and shows us more of her incredible personality. Her and Whakan have developed an unshakeable bond. Even with this new light entering into the world there was some shadow that came with it. 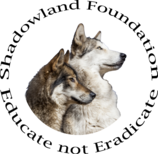 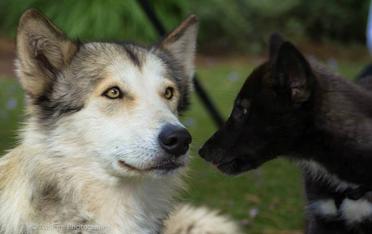 Our most frequently asked question is, “Where did the wolves come from?” Their original line dates back to 1993 as rescues from the Denali National Park. They have four different subspecies: Alaskan, McKenzie, Black and Arctic.  As rescues, we do not know from what breed of dog they may have too (we can only assume the Malamute or Husky since they come from Alaska). The USDA, the State of California, Los Angeles City and County have classified them as wild animals.

Shadowland Foundation deliberately raised this pack, born in captivity, to be ambassadors to their wild cousins. Our mission is to present an opportunity to interact with wolves and learn how their specific physical traits and pack dynamics made them successful enough to survive the Ice Age and keep our ecosystems healthy. Our incredible pack do a great service and honor their heritage and honor us by their dedication and trust of us humans; teaching us about wolves thereby ensuring a place for all wolves everywhere, forever.  ​

Not  long after their prophetic meeting, the devastating news about Shadow's cancer would rock their world. On September 16th, 2008, the day before Paul's 49th birthday, Shadow was diagnosed with an inoperable, incurable, soft tissue sarcoma originating in her sinus further invading her skull,her cheekbone and was crushing her right eye. They gave her about a month or two to live and offered to put her down right then and there. For Paul, the thought of losing yet another wolf, another member of his family, was more than he could bear. If notfor the love and support of Colette, his dream, his life, would have crumbled.
Colette faced it head on. Using all her spiritual training along with her belief in homeopathic medicine she went searching for a cure that she knew, deep in her heart, existed. In her own words; "I believe that there is a Universal antidote to every Universal condition."  Their faith and trust  eventually led them to the Veterinary Teaching Hospital in Ft. Collins at Colorado State University. However, the economic downturn had hit hard and the time and the funds to go were not available.
On Valentine's Day, almost six months after Shadow's diagnosis Paul received another call from the wolf sanctuary, the news, "we have pups". With the knowledge that wolf packs lives are dedicated to their pups, it was decided to add a new member of the pack, choosing life instead of waiting to see if Shadow would die. Born February 1, 2009, same day as Shadow, the pack chose their first male wolf, named Noshi Takoda - Noshi means "father" in Algonquin and Takoda means "friend to everyone" in Native American Sioux.